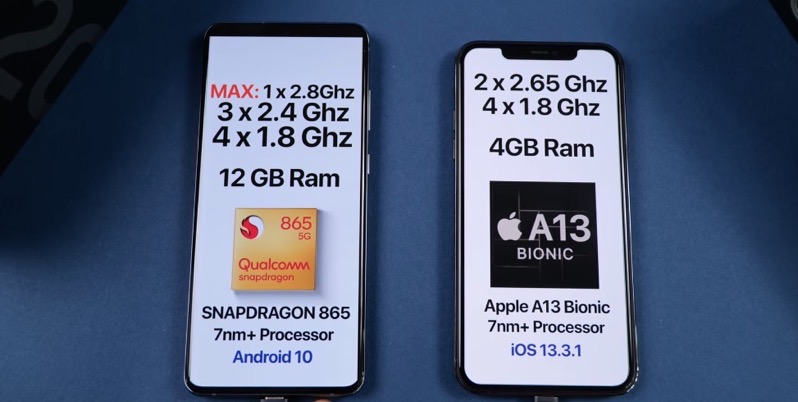 With last week’s launch of the Samsung Galaxy S20 line up, numerous YouTubers are sharing hands-on tests of their experience with these newest flagships, versus Apple’s iPhone 11 Pro Max.

YouTube channel EverythingApplePro has shared a video comparing both flagships from Samsung and Apple, putting them through an app-launching test, benchmarks, cellular speeds test, video export, and also testing fingerprint unlocking versus Face ID and more.

In EverythingApplePro’s unscientific tests, the app launching test showcased the limitations of RAM in the iPhone 11 Pro Max. The Galaxy S20 Ultra was called a “beast” of a phone for its speed.

While the iPhone won the first round of just opening apps, edging out the Galaxy S20 Ultra by 14 seconds, the second round of re-opening these apps to test multitasking and RAM saw the Samsung flagship victorious, winning the in 1 minute and 5 seconds, versus 2 minutes and 4 seconds for the iPhone 11 Pro Max.

The video shows how the iPhone closed pretty much every single app, resulting in them having to be reopened. Unless you’re a power user that opens and closes a bunch of apps all the time, this test may not matter that much to you.

When it came to reading the temperature on these phones, the YouTube channel saw the Galaxy S20 Ultra see temperatures of 104F, while the iPhone was at 98F.

When it comes to facial recognition unlock speeds, Apple’s Face ID wins. But the fingerprint reader embedded into the Galaxy S20 Ultra is much faster than Face ID, however, it wasn’t accurate at times.

Previously, EverythingApplePro also put the cameras of the new Galaxy S20 Ultra to the test versus the iPhone 11 Pro Max.

Apple is expected to launch a successor to the iPhone 11 Pro Max later this fall, which should provide a better comparison to Samsung’s latest flagship.