Samsung Gear S2 Smartwatch will Use a New Industry-Approved eSIM 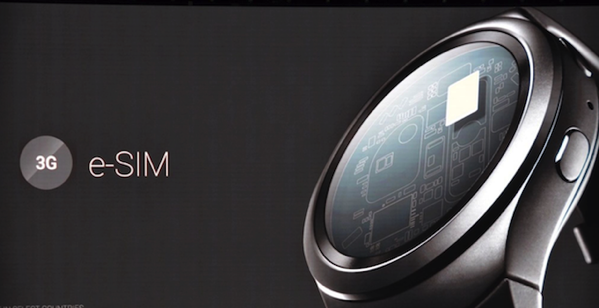 Samsung’s Gear S2 Classic 3G smartwatch will be the first ever device on the market to come equipped with a new industry-approved eSIM, that allows users to choose carriers on their programmable SIM, The Verge is reporting.

Samsung, Apple and various other mobile carriers (including Rogers) have been working to create this new standard for embedded SIMs for the past one year.

This isn’t the first mobile device to offer a programmable SIM card (certain iPads have this functionality). Nor does the standard apply to smartphones, with the GSMA saying that won’t be coming until June. And while the June eSIM will allow users to store the profiles of multiple carriers on a single phone, this new specification only supports one carrier at a time.

The new specification is backed by some of world’s largest hardware manufacturers (including Samsung, LG, Microsoft, and Huawei) and mobile carriers (including AT&T, Verizon, Vodafone, Deutsche Telekom, Telefónica, and EE).

Missing from this public lineup of partners is Apple

GSMA’s chief engineer Ian Pannell has told the source that the new specification is all about giving users more control. “We don’t want the consumer to be disadvantaged compared to the current SIM model”, he said. He added that the new specification is a simpler version of the full eSIM “to ease hardware partners into the change”. Pannell also revealed that the eSIM is also 90% smaller than a traditional SIM card and will offer “a big saving in space”.

Even though Apple has developed its own programmable Apple SIM, it is believed to have been actively involved in the GSMA’s development of the eSIM. The association said last year that it would continue to work with Apple to secure their support for the initiative.

The Samsung Gear S2 Classic 3G will be available next month, while the eSIM specification for smartphones will be announced late this year.