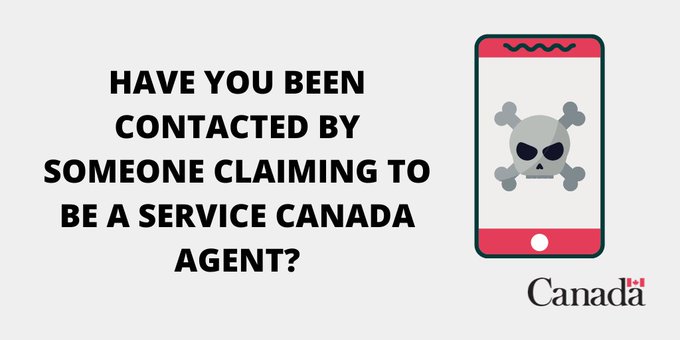 Canadians appear to be inundated with scam calls by scammers claiming to be employees with Service Canada, yet again.

The phone calls appear to be originating in the United States, according to those sharing their experiences on Twitter.

On Friday, Service Canada warned Canadians, “You should be vigilant when any person claiming to be a Service Canada or 1 800 O-Canada employee contacts you in a way that you are not normally contacted by the federal government.”

I work for Service Canada and STILL get scam calls from "Service Canada" on my work phone AND my cell phone. Here are the deets: we don't have a "legal department", we don't employ the RCMP, and we will never ask you for banking/credit card info.

Service Canada doesn't call you. If someone calls claiming to be them, they're a scammer and you should either hang up, or waste as much of their time as possible so they can't scam anyone else. Bonus points if you get them to swear at you.

According to the Government of Canada, Service Canada will never ask you for personal information such as your Social Insurance Number, credit card number, bank account number or passport number, either by telephone, email or text.

Don’t fall victim to these scam phone calls by hanging up if they sound too good to be true. “When in doubt, to verify the identity of the caller as a Service Canada employee, please hang up and contact 1-800 O-Canada (1-800-622-6232) directly,” explains the Government of Canada website.

With Canadians still applying for the Canada Emergency Response Benefit (CERB) still, scammers just need a handful of people to fall victim in their quest for your personal information.