Should you buy an iPhone 3G? Check this out…

Our fellow iPhoneinCanada.ca reader and top designer/illustrator Pierre Tabbiner created this little “image” for people who are trying to hold themselves off from buying an iPhone 3G. I was going to post it a while back but totally forgot. 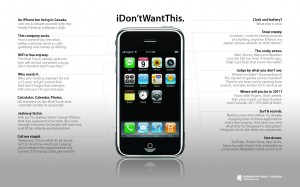