Apple announced a new “Hey Siri” feature coming in iOS 8 but didn’t get to share details about it at its WWDC 2014 keynote. Essentially, the feature now allows Siri to be activated when your device is connected to a power source (for example when plugged in while in the car), bringing true ‘hands-free Siri’ capabilities.

In Settings > General > Siri, there’s a new toggle for Voice Activation that reads:

When connected to power, start talking to Siri without pressing the home button by saying “Hey Siri”. 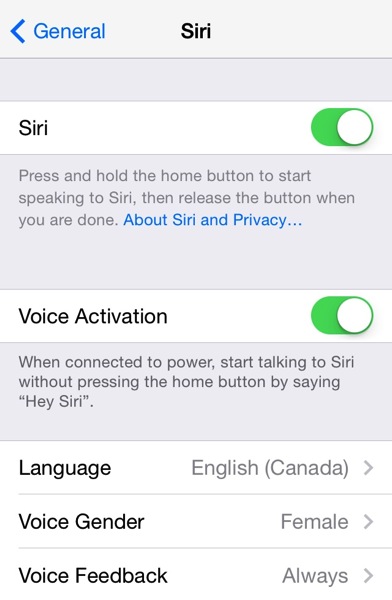 So with your iPhone or iPad screen off, all you need to do is say “Hey Siri” and the voice activation will kick in. Check out the demo below:

For those with Bluetooth connectivity in your car, new Siri Voice Activation will make it much safer to use your iPhone while driving (well, you should never be using a cellphone while driving), providing similar CarPlay-like capabilities.

Other new Siri features in iOS 8 include the ability to search the App Store and iTunes for specific apps and songs.