Using Wi-Fi, Airplay, and an Apple Express, Craig Knudsen of Yamaha has figured out how to get Siri to play a Yamaha Disklavier; complete with moving pedals and keys in full expression. 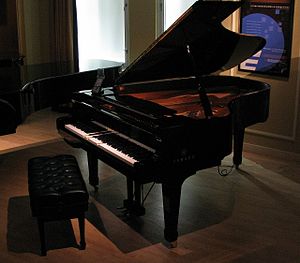 The pointer comes via Jim Dalrymple of Loop Insights:

Take a standard MIDI songfile and convert it to an audio file (while maintaining the MIDI data). The songfile is then sent wirelessly via WiFi to an Apple Airport Express (which is mounted underneath a Yamaha Disklavier reproducing piano. The audio output of the Airport Express is then connected to the analog MIDI inputs of the Disklavier, using a standard audio cable.

Then, you simply ask Siri to play your favorite song from your iTunes library, and Siri responds immediately, by making the Disklavier’s keys and pedal move up and down, recreating the performance, including full orchestration.