Ask Siri “What is Zero Divided by Zero?” and Feel Like Real Winner [PIC]

Want to brighten up your morning today? Whip out your iPhone and ask Siri the following math question: “What is zero divided by zero?” 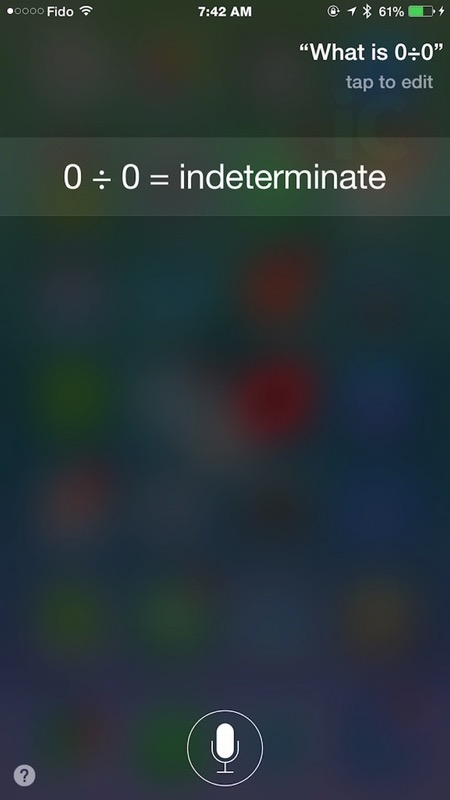 Siri will respond cheekily with the following:

“Imagine that you have zero cookies and you split them evenly among zero friends. How many cookies does each person get? See? It doesn’t make sense. And Cookie Monster is sad that there are no cookies, and you are sad that you have no friends.”

Ouch. So when our titled mentioned you could feel like real winner, we actually meant a total loser, in your dark brown van down by the river (just kidding!).

This question for Siri has been going viral after Breaking Bad star Aaron Paul told his followers to try it out yesterday:

Ask Siri "what is zero divided by zero?" RIGHT. NOW.

So there you go. Enjoy your Tuesday, you filthy, friendless monster. Hey, at least you can spend your time updating to iOS 8.4 to get ready for Apple Music, right?

Amazon announced an all-new Alexa experience built just for kids today, with the launch of Echo Dot Kids. Echo Dot Kids come with Owl or Dragon designs and a 2-year worry-free guarantee. If your speaker breaks, Amazon will replace it. Also included are parental controls (time limits; explicit lyric filtering) and one year of Amazon […]
Gary Ng
23 mins ago

[caption id="attachment_382288" align="aligncenter" width="1920"] Image: @OnLeaks and @Smartprix[/caption] Samsung's upcoming flagship smartphone, the Galaxy S23 Ultra, has just leaked in high-resolution renders that reveal its design and more. The leaked renders come from Smartprix and known tipster @OnLeaks. Samsung is months away from actually unveiling the Galaxy S23 series, which is being developed under the...
Nehal Malik
36 mins ago