Skype WiFi Will No Longer Be Available After March 31st

Skype’s WiFi service, which let users buy Wi-Fi access in paid public hotspots for a small fee, will no longer be available after March 31st, TechCrunch is reporting. The Microsoft-owned service says that it is killing off the feature in order to better focus its efforts “on bringing you the best possible experience through our core Skype features”. The company has started sending out the following notice to users: 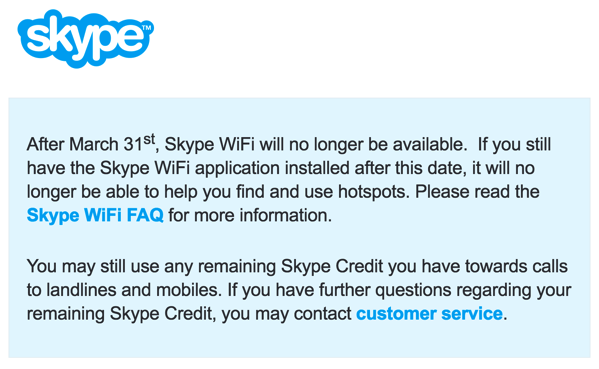 The idea of Skype WiFi, which was originally named Skype Access when it launched in 2009, was to apply to wireless internet access the same principle that Skype applied to the world of calls and texts i.e. offer the same service that the carriers offer, but for free or at a much cheaper price. But in more recent years, it feels like the Skype WiFi service had more or less gone to seed, with no word on just how many people used it.

For those who were users of Skype WiFi , the feature in the app will stop scanning for and using hotspots after March 31, and if you are a Skype user who bought credit to use for the WiFi service, you can use it toward other Skype services, such as calling non-Skype numbers.

If you don’t use Skype for making other kinds of calls and the only reason you had credit on your account was for Wi-Fi, you need to contact customer service to talk about credits.

Skype’s core features are apparently based around things like the premium Skype for Business service, integrations with other Microsoft services, and newer services like a bot developer platform for the Messenger, and a low-bandwidth version for developing markets.

Google appears to be working on a new web browser for iOS based on the tech giant's own Blink engine instead of Apple's WebKit, in violation of the App Store Review Guidelines — reports The Register. The in-development browser was referenced in a recent Chromium bug report, but Google says it won't actually release it....
Nehal Malik
15 mins ago