Skype has released a new app for iOS users, Skype WiFi (formerly known as Access). This new app will enable users to make calls at over 1 million hotspots around the globe. All that is required is Skype credit, and you pay for only the minutes you use, plus it’s a pay-per-use model for getting online as well:

Skype WiFi is great for travellers all over the world: It’s a must-have app, for your iPhone or iPad whether you’re on a business trip or enjoying holidays abroad. Skype WiFi offers you a cost-effective and easy way to get online with an iPod Touch, iPhone or iPad. Paying on a per-minute basis for WiFi Internet access is great when you’re abroad as you can avoid data roaming charges when you update Facebook, send a tweet, make a Skype call or upload photos.

As a frequent traveller, this app is going to fantastic for making calls using your existing Skype credit, and going online. Save money instead of paying for roaming data plans:

Reduce your data roaming costs when youâ€™re abroad:
â€¢ Use Skype WiFi to connect to WiFi hotspots at hotels, airports, train stations, bars and restaurants â€“ available at over 1 million hotspots worldwide.
â€¢ Just one tap to connect â€“ then browse the internet, check email, use Skype, check Facebook, update Twitter, upload photos, download music or ebooks.
â€¢ Only pay for the time youâ€™re connected – there are no limits on the amount of data you can upload or download.

Skype WiFi Will Be Free for One Hour Worldwide

Skype is offering one hour free for the globe from Saturday 20th August 00:00 till Sunday 21st August 23:59 BST for a maximum of 60 minutes. Just download Skype WiFi and connect to a participating hotspot! 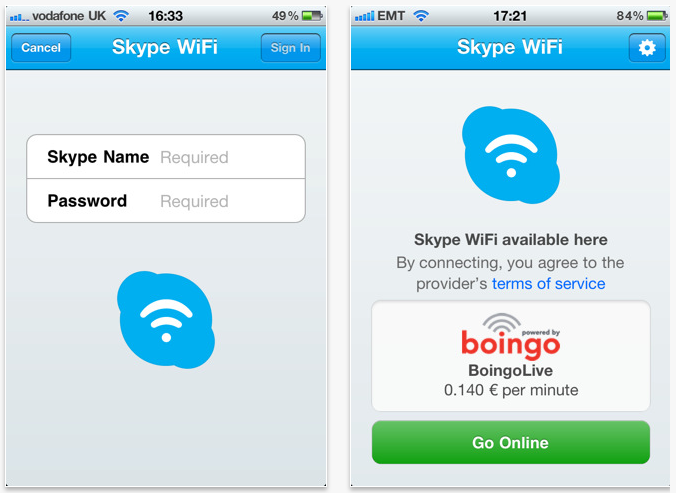