It appears technology continues to change the agriculture industry in Canada, but this time it’s all about being mobile. A recent study by Farm Credit Canada noted 29% of farmers have smartphones. The modern farmer is now able to track crop quality and yields, pests, inventory and more from their phones.

Farmer Greg Stamp’s favourite farm tech is his iPhone, as it allows him to quickly check the weather, post images of his crops to social media and respond to customers throughout the work day–all from within his tractor on the fields.

Rick Taillieu from the Alberta Canola Producers Commission notes the numbers of agriculture apps and mobile websites continue to increase, as their own mobile site allows farmers to check and track futures along with local pricing in Alberta. 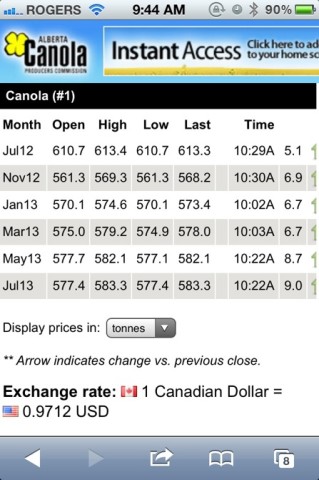 We’ve previously seen other apps such as SellSmart that allows farmers in Ontario to sell their grains in the commodity market easily from their iPhone. It’s pretty evident farmers are equally addicted to their iPhones just like the rest of us. Anyone out there using a smartphone on the farm?