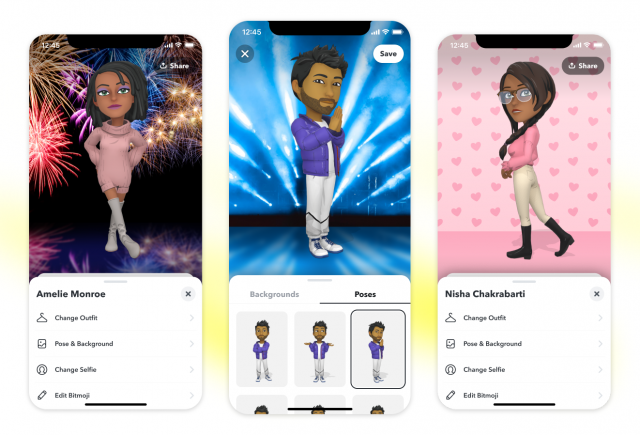 This week, Snapchat is rolling out the new 3D Bitmoji avatars for users to customize. The feature will enable users even more customization options for their avatar and introduce a brand new way of looking at their Bitmoji avatar.

Snapchat has announced that it will be introducing its new 3D Bitmoji avatars this week. The feature should be available on iOS and Android now, though you will have to ensure your running the latest version of the app. Once available, 3D Bitmoji customization options can be found when clicking on your avatar on the top left corner of the screen.

Users will be able to choose from over 1,200 combinations of body poses, facial expressions, gestures, and backgrounds. The options range from stoic to silly, enabling users to express themselves and take ownership of their avatar. Additionally, their 3D Bitmoji will be outfitted in whatever outfit that has been chosen. Snapchat states that the feature uses “Pixar-quality 3D capabilities” and that users will be able to point out unique details such as clothing textures and embellishments from their outfits.

On top of the news that 3D Bitmojis are available to use, Snapchat has announced that over 200 million users utilize the Bitmoji feature each day. Additionally, the social media platform has quite the install base in Canada, with a reach of 10 million in the country. While on the topic of Canada, the company that originally created Bitmojis, Bitstrips was founded in Toronto, Ontario in 2007. Snapchat officially acquired the company in 2016 and the rest was history.