Given that Gorilla Glass is used by Apple and many other smartphone manufacturers, this announcement represents high interest for every company building fingerprint sensors into its handsets. As reported by The Next Web, the technology includes manufacturing and bonding sensors directly to the display material. 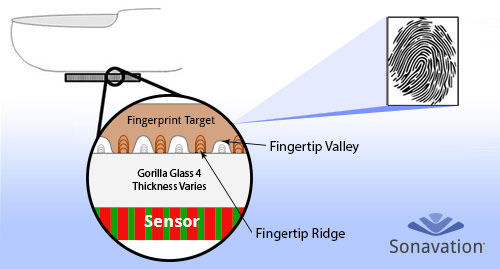 What Sonavation managed to do is bond a biometric 3D sensor that uses ultrasound to map the fingerprint placed on it. By comparison, the Touch ID currently found in the iPhone 5s and above has a sensor that uses advanced capacitive touch to take high-resolution images of small sections of the user’s fingerprint from the subepidermal layers of the skin.

According to Sonavation’s CTO Rainer Schmitt, their technology is “well-suited for through-the-glass fingerprinting and specifically architected to deliver advanced security and ease-of-integration into mobile and IoT devices.”

Though details on how it will work are sparse, Sonavation says its sensors are “capable of capturing fingerprint data into the ridges and valleys.” It also says 3D scanning can take place if a finger is wet, dirty or oily — all without compromising accuracy.

What the small company announced today is just the first step toward a convenient way of securing the data we store on our phones. It will be interesting to see when this technology will be available on smartphones or tablets.