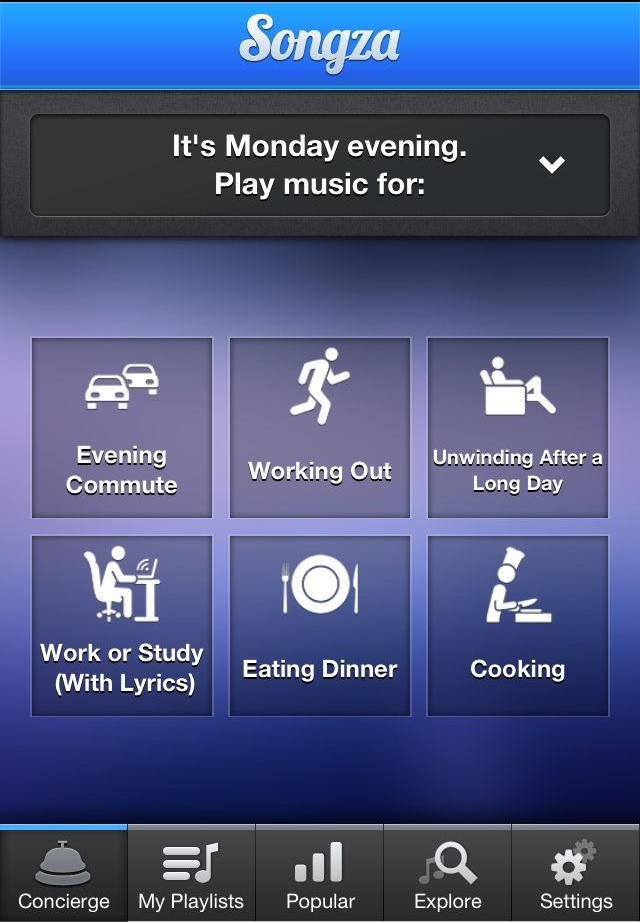 As a Canadian, the choice between music streaming services is quite small compared to the United States. Many top services such as Pandora and Spotify have yet to expand to Canada. Yes, I know Spotify is considering coming to Canada, but we haven’t yet been granted access.

So here in Canada, we can easily crave a choice when it comes to music streaming. That is why Songza has just expanded to Canada earlier this month on August 7th. Songza has both a website and mobile application available to stream any time throughout the day.

What can you expect from Songza? Read on below: (App Store)

What I love about Songza is the ready-to-go playlists for a variety of events. In the concierge section, one may have a playlist for cooking, working out, or a car ride. You may also create your own playlists, view popular music, and much more.

While New York based Songza has crossed the Canadian border, this was not an easy task, noted by the Financial Post:

It had to secure licensing rights to play the music legally. There are essentially two options for this: One is to approach every artist and record company individually and secure permission and the second is to go through Re: Sound Music Licensing Co., a not-for-profit agency that collects and distributes royalties related to performance rights on behalf of recording artists and labels.

Eventually Songza reached a deal with Re: Sound over music royalties. Details of the deal were not made public, all we know is that the Songza’s deal was the first completed by Re: Sound.

Click here to try out the official Songza iPhone application today. After all it’s free of charge!