In addition to listing shares on the open market in its initial public offering (IPO) on Nasdaq today, Sonos also redesigned the Nasdaq bell, the sound that signals the opening and closing of the capital markets every day. Sonos Sound Experience Lead Giles Martin and Academy Award-winning sound engineer Chris Jenkins worked with Nasdaq on the project. 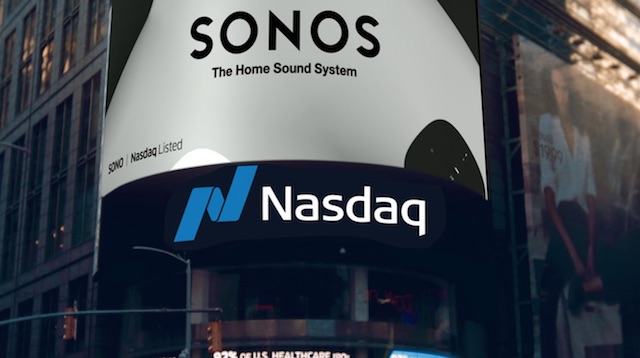 Sonos explains how its sound engineers experimented with different instruments and techniques and artfully created a bell that honors Nasdaq’s roots. “Like other bells, this one tells us something important. The new bell is a reflection of how Nasdaq sees the world differently”, says Sonos.

While celebrating Sonos becoming a public company, it also tells the world that it takes sound very seriously. “Most of all, it represents both companies’ vision for continued, relentless pursuit of what’s possible”.

Meanwhile, Sonos shares (SONO) rose over 20% in midday trading after opening at $16.00, which is 7% higher than the $15 initial selling price. The stock’s intraday high of $18.71 would give Sonos an implied market value of just over $1.8 billion.

“Nobody thought we could put all the competitive streaming services on one platform,” Sonos CEO Patrick Spence told CNBC’s “Squawk Box” Thursday ahead of the debut trade. “I see no reason that those partners won’t continue to want to put their services on really the best multi-room home system.”

“In the filing, we’ve just been very upfront about the fact that we could turn off people’s service, they could turn them off. We’re transparent by nature, so that’s in there,” Spence said.

Check out the video below for a look at how Nasdaq and Sonos remastered the bell.