Sonos One Leaves Similar White Stains on Wood as the HomePod

Just yesterday, reports of Apple’s HomePod leaving white ring stains on wooden furniture made the headlines, an issue that was officially acknowledged by Apple as well and today, a reviewer at Tom’s Guide has highlighted that the Sonos One feet also leave the same white marks on wooded furniture, possibly due to its vibration-insulating feet. 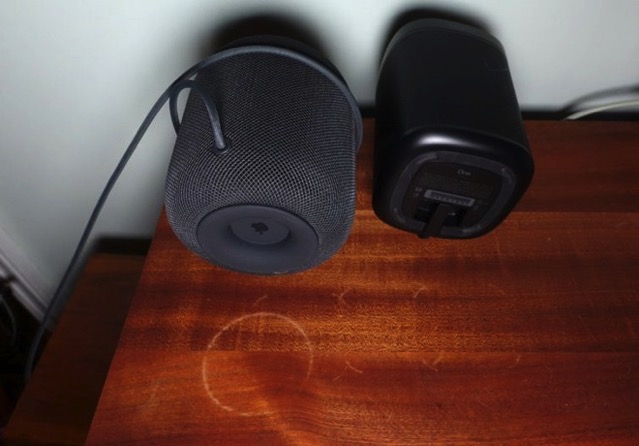 According to AppleInsider, Sonos has four raised “feet” instead of a solid ring like the HomePod, and contact with these feet is said to be inducing the temporary markings on furniture. However, the markings from the two speakers is not appearing on all wood surfaces. The source notes that their test HomePod has been in a fixed location on a finished wood surface since Saturday, but no ring has been formed.

“It is not unusual for any speaker with a vibration-dampening silicone base to leave mild marks when placed on some wooden surfaces,” the Apple support webpage for the HomePod reads. “The marks can be caused by oils diffusing between the silicone base and the table surface, and will often go away after several days when the speaker is removed from the wooden surface. If not, wiping the surface gently with a soft damp or dry cloth may remove the marks.

It must be noted that surfaces like glass, granite, MDF plywood, polyurethane-sealed wood, and laminate furniture such as that found in Ikea, are not affected by the staining problem