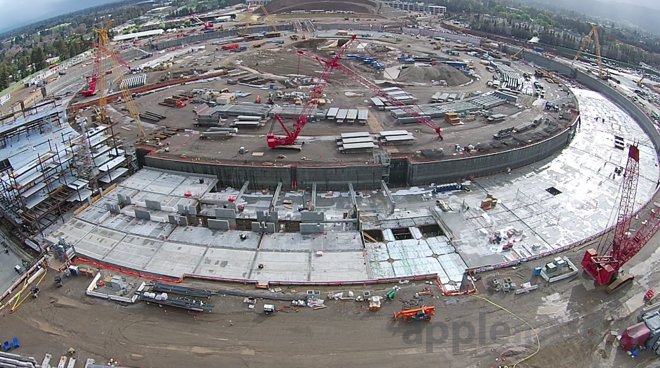 The latest aerial tour of Apple’s Campus 2 mega-project, courtesy of AppleInsider, shows major progress in its ‘Spaceship’ Ring, where interlocking concrete slabs are building a foundation for a steel structure. According to the source, the Ring connects to a tunnel that will replace Pruneridge Avenue, which formerly crossed through the site. Furthermore, the new underground roadway will also route vehicles toward two above ground, four storey parking structures.

“Apple began demolishing the former Hewlett Packard Pruneridge Campus buildings in 2013, but within just the last month it has also removed Ridgeview Court 1, a two-building complex Apple had been using as office space, located south of the HP site (below Pruneridge) on land Apple had previously acquired before the HP site became available.

Just north of newly demolished Ridgeview Court 1 site, Apple’s underground theater is now taking form, with a circular structure being built within the north section of the large excavated hole. Construction permits indicate that the auditorium complex will cost around $161 million to complete”.

Check out the latest aerial video of Apple’s Campus 2 and let us know what you think.

The display technology experts over at DisplayMate have crowned the iPhone 14 Pro Max's screen the best to ever grace a smartphone, giving it their highest-ever A+ rating and "Best Smartphone Display Award." DisplayMate is one of the world's leading authorities on display technology. The corporation's reviews and reports are based on comprehensive, objective laboratory tests...
Nehal Malik
18 mins ago