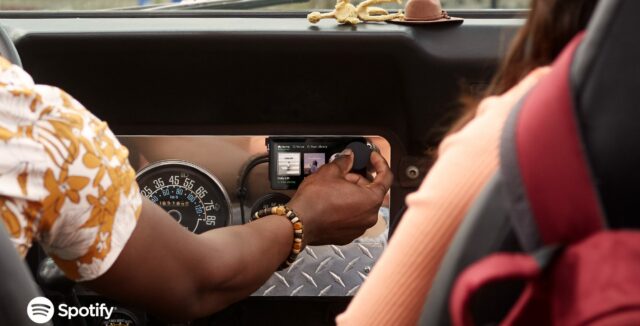 Spotify on Tuesday announced the launch of ‘Car Thing’ — a companion device for the music streaming service meant to go on your dashboard and the company’s first hardware offering, in the U.S.

“Car Thing enables listeners to play their favourite music and podcasts quickly using ‘Hey Spotify’ voice commands, as well as simple taps, turns, and swipes — allowing listeners to start playing that hit song or the latest podcast episode before they pull out of the driveway,” explains Spotify.

We first saw images of Spotify’s prototype device back in April 2021, shortly before the company officially announced it was working on its first hardware offering. Car Thing saw a limited release to Spotify Premium users in October, and it is now available to purchase across the U.S.

Car Thing features a 4-inch touchscreen (not unlike that of a small smartphone), a large navigation knob on the front with a smaller ‘Back’ button underneath it, as well as four programmable buttons for presets and one ‘Menu’ button along the top. The device comes equipped with a USB-C port for hardwired connectivity, and is compatible with a number of mounting solutions.

Spotify is also working on some (highly-requested) new features for Car Thing, including Night Mode for a dimmer screen in the evening and an Add to Queue option for users to queue up the songs they want to listen to.

Car Thing is now available to purchase in the U.S. for $89.99 USD — no more waitlists! The device requires a Spotify Premium subscription plan and a phone with a mobile data connection to work. You can find out more about how to use Car Thing on Spotify’s website.

No word yet on when the Spotify Car Thing will launch in Canada, but stay tuned for updates.

Last week, Spotify announced its acquisition of both Chartable and Podsights in yet another move meant to further the streamer’s ambition to become the dominant podcast platform.

Terry Gou, the founder of Apple supplier Foxconn, was instrumental in convincing the Chinese government to ease COVID-19 restrictions in the country, which were significantly affecting iPhone production — reports The Wall Street Journal. The information comes from unnamed sources familiar with the proceedings. According to the report, Gou sent Chinese leaders a letter over...
Nehal Malik
43 mins ago