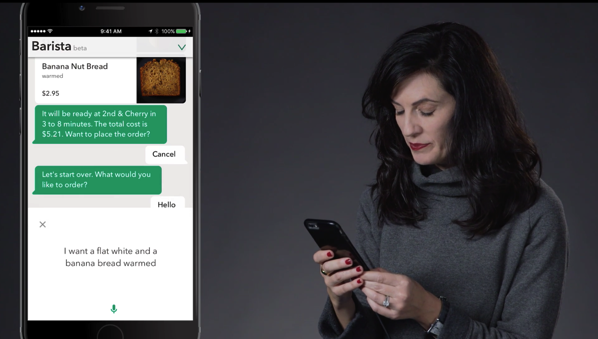 Starbucks has today announced the launch of new voice ordering capabilities within its official iOS app as well as through the popular Amazon Alexa platform, for beta testers in the United States.

The features are an extension of Starbucks Mobile Order & Pay, which allows customers to order and pay for their items before arriving at their store. As part of its initial rollout, select customers can now order coffee “on command” using the new ‘My Starbucks barista’ feature integrated into Starbucks for iOS.

“The Starbucks experience is built on the personal connection between our barista and customer, so everything we do in our digital ecosystem must reflect that sensibility,” said Gerri Martin-Flickinger, chief technology officer for Starbucks. “Our team is focused on making sure that Starbucks voice ordering within our app is truly personal and equally important was finding the right partner in Amazon to test and learn from this new capability.

In addition to ordering coffee through Starbucks iOS app via voice commands, the company has also launched a Starbucks Reorder Skill for Amazon Alexa. The skill also leverages Starbucks Mobile Order & Pay technology, allowing customers to order their usual Starbucks food and beverage items as they move throughout their day. Customers simply need to say “Alexa, order my Starbucks,” giving them the ability to order their usual items.

The initial rollout of ‘My Starbucks barista’ will be available to one thousand customers in the U.S., with plans for a continued phased rollout through summer. An Android version will also be released later this year. No word on when we’ll see this in Canada, but that’s pretty cool stuff.