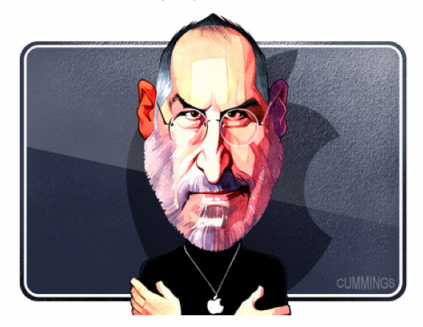 Steve Jobs has certainly changed the way we work and play. His vision has created groundbreaking products such as the iPhone and iPad. Apple has transformed into one of the largest tech companies in the world not by chance–it’s because of Steve Jobs.

President Obama on Steve Jobs in response to a reporter’s question:

…And something that’s always been the greatest strength of America is a thriving, booming middle class, where everybody has got a shot at the American dream. And that should be our goal. That should be what we’re focused on. How are we creating opportunity for everybody? So that we celebrate wealth. We celebrate somebody like a Steve Jobs, who has created two or three different revolutionary products. We expect that person to be rich, and that’s a good thing. We want that incentive. That’s part of the free market…

The Financial Times has given Steve Jobs the honour of the ‘Person of the Year’:

A rebuttal of F. Scott Fitzgerald’s much-quoted aphorism that there are no second acts in American life does not come more decisively than this. When Steven Paul Jobs first hit the headlines, he was younger even than Mark Zuckerberg is now. Long before it was cool to be a nerd, his formative role in popularising the personal computer, and Apple’s initial public offering on Wall Street â€“ which came when Mr Jobs was still only 25 â€“ made him the tech industry’s first rock star.

Now, three decades on, he has secured his place in the foremost ranks of the West Coast tech titans who have done so much to shape the world around the turn of the millennium. Long-time nemesis Bill Gates may be richer and, at his peak, arguably exerted greater sway, thanks to his monopoly over the world’s PC software. But the Microsoft co-founder has left the stage to devote his life and fortune to good works. It is Mr Jobs who now holds the spotlight.

It certainly has been an incredible year for Jobs and Apple. The iPad has been widely successful and the iPhone 4 continues to set the benchmark for smartphones. What do you think? Is Steve Jobs the ‘Person of the Year’?