Here’s Why the Steve Jobs Monument Has Been Removed in St. Petersburg 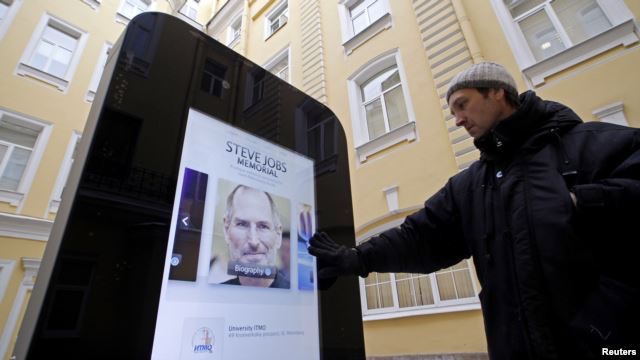 A monument to honour Steve Jobs was removed from the grounds of a St. Petersburg technical college, following the day Apple CEO Tim Cook spoke publicly about his sexual orientation. According to Fortune’s report, the two reasons given why it has been taken down are, Tim Cook is gay and that Apple spies for the NSA (via News 24/7).

But it had to come down, according to a Russian news report, for two reasons: (pardon the crude translation).

Instead of a granite status, the memorial was actually an oversized iPhone (shown above) with a touch screen that displayed information about Jobs and the company he co-founded. Maksim Dolgopolov, president of the Russian company that put the monument up, has said that he had no idea when he paid for it that the story of Apple’s success was “a smokescreen for a special operation, the NSA of the USA.”

Meanwhile, Radio Liberty has also published the story giving only one reason for the removal, which is that Tim Cook came out as gay in a country with laws against homosexual “propaganda”.