Steve Jobs via Email: “We Don’t Track Anyone” 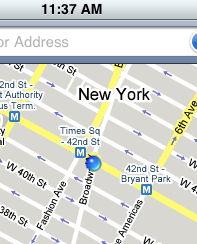 Here’s another ‘Steve-mail’ to brighten up your Easter Monday. With the whole iPhone location tracking fiasco, we haven’t heard a response from Apple–until possibly now?

A MacRumors reader has apparently received the following response from Steve Jobs via email (the email hasn’t been proven to be authentic or not):

Q: Steve,
Could you please explain the necessity of the passive location-tracking tool embedded in my iPhone? Itâ€™s kind of unnerving knowing that my exact location is being recorded at all times. Maybe you could shed some light on this for me before I switch to a Droid. They donâ€™t track me.

A: Oh yes they do. We donâ€™t track anyone. The info circulating around is false. Sent from my iPhone

Android users are also being tracked too. However, the difference is data is only stored short term, and previous locations are overwritten as new ones come in.

The tracking of our location that’s being stored in an unencrypted file is apparently a bug. The Cydia tweak Untrackerd was released 24 hours later to address this for jailbroken iPhone users. To secure your device and computer, just encrypt your iTunes backups.

Will Apple release a public statement over this issue? I think so. Expect a coordinated response soon.