Celebrate 30 Years of Mac with a Rare Steve Jobs Interview

Steven Levy, a freelance journalist for Rolling Stone back in 80’s, has shared his lost interview with Apple CEO and co-founder Steve Jobs about the coming Mac computer, as Cupertino celebrates the 30-year anniversary of the Macintosh. He describes how he got into a car outside 10460 Bandley Drive in Cupertino on a late-November day in 1983, looked at the driver and said hello to Steven P. Jobs (via The New York Times). 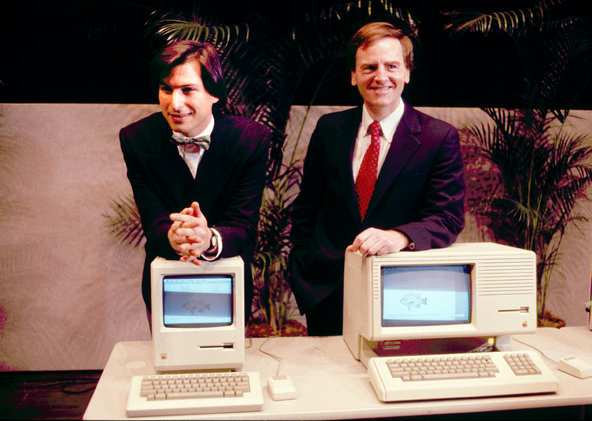 He notes that Steve complained about a coming article about the Macintosh, a computer that was still two months away from being announced. He said that the article would not be on the cover of Rolling Stone, but rather stuffed inside a planned issue. “Jobs groused that the magazine was an expletive, and said a previous cover article about MTV was an expletive too”, Levy recalls. He couldn’t get a word in but when he finally did, Levy explained that the he had written the MTV cover article Steve hated so much. “He immediately changed the subject”, says Levy.

“For the next couple of hours, over pizza with olives, Mr. Levy interviewed Mr. Jobs about the coming Mac computer, his design philosophy, a breakup which had left Mr. Jobs love-sick and, ominously, struggles with Apple’s board over the direction of the company. (Mr. Jobs would be fired two years later.)

The interview was a rare and raw moment for Mr. Jobs, where he bared his true feelings on the record with a reporter.”

Until now, the interview’s transcript had been tucked away in one of Levy’s files, but in order to celebrate the 30-year anniversary of the Mac, he is appending the transcript, which is “essentially unexpurgated,” in an updated Kindle version of the book about the birth of the Macintosh, “Insanely Great: The Life and Times of Macintosh, the Computer that Changed Everything.”

Below are some snippets from the 11,500-word conversation:

“I just had a romance that I really care about, a lot — I mean, a lot — go up in smoke. Because of the stress, and the sort of other woman that Macintosh is,” Mr. Jobs said.

Mr. Jobs seemed to know exactly the kind of impact the Mac would have, and the team of people who had helped make it a reality. He repeatedly refers to the team that built the Mac as “pirates,” and then says a quote that became famous years later: “Better to be a pirate than join the navy.”

Mr. Jobs talked about his net worth falling by $250 million in six months. ”I’ve lost a quarter billion dollars! You know, that’s very character building,” he said, and notes that at some point, counting your millions of dollars is “just stupid.”

During the Super Bowl in 1984, Apple released a commercial that stunned viewers (Directed by Ridley Scott).