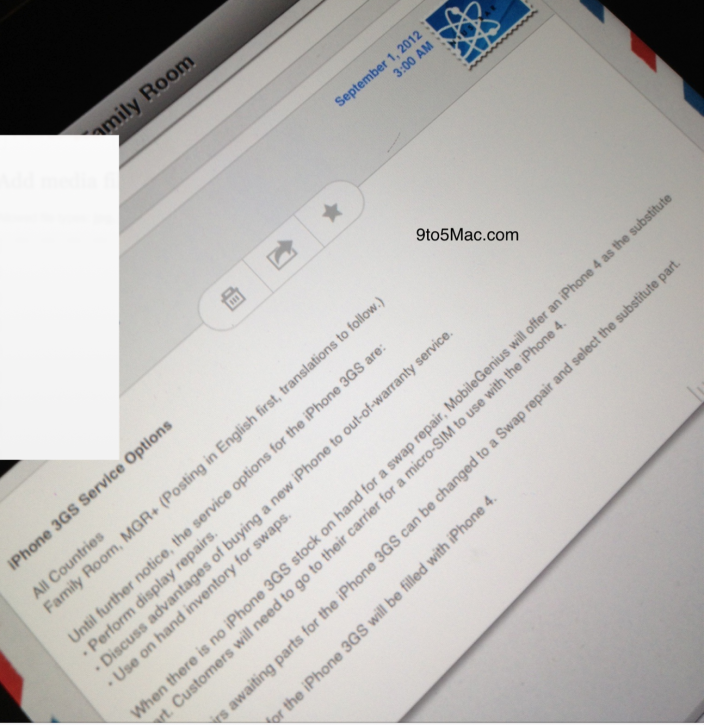 If you need another reason to believe the sixth-generation iPhone is coming on September 21st, maybe the latest shortages of the iPhone 3GS will be convincible. According to 9To5Mac, the email shown above was sent out to all Apple Genius Bar employees.

The store employees are directed to repair iPhone 3GS displays, discuss advantages of buying a new iPhone, and replace broken 3GS units with the iPhone 4. Here’s more from 9To5Mac:

The process of a screen repair or buying a new iPhone altogether conserves the limited amount of iPhone 3GS replacement units in Apple’s current global inventory.

This type of shortage could be a huge indicator that Apple will either soon halt production of the iPhone 3GS, or that the sixth-generation-iPhone production is in full force using all available lines.

Since the 3GS was launched during the summer of 2009, the phone still happens to be a popular choice with consumers. When iOS 6 noted support for the iPhone 3GS, many were surprised. This could indicate that the device will sell for one more year on the market.

Once the iPhone is released later this month (purportedly) specific countries could see two free phones on the market. Apple’s iPhone 3GS and 4 would have a price-tag of $0.00 with the iPhone 4S selling at $99. You can even buy the phone carrier unlocked on Apple’s website for $375 right now.