According to The Province, a Surrey woman is suing Apple alleging the company has violated her privacy and security rights via their iOS devices. Amanda Ladas filed a lawsuit today in B.C. Supreme Court and alleges Apple’s iPhone, iPad and iPod touch tracks the movements of her and son–without them knowing:

“Ladas is concerned that, without her permission, anyone with moderate computer knowledge can find out where she’s been,” said spokeswoman Laura Ballance in announcing the suit.

“The claim alleges that Apple has violated the privacy and security rights of users of its products by the design, production, distribution and/or operation of iOS4, and has engaged in deceptive acts or practices that have the capability, tendency or effect of deceiving or misleading class members and that these practices entitle members of the class to aggravated, punitive and/or exemplary damages.”

Ladas has hired Vancouver law firm of Ganapathi and Company, which the The Province notes the lawsuit has the following:

Is this lawsuit for real? We may be jumping to conclusions here, but Apple included the ability to toggle Location Services OFF in iOS 4:

Turning Location Services on or off 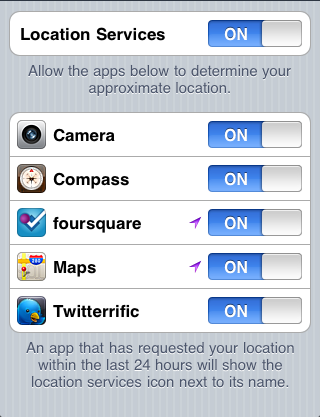 One tap is all it takes to turn off Location Services. One. Tap.

What do you think about this lawsuit? It reminds me of the dude who tried to sue Google over the use of his Gmail account.