Survey Finds 26% of Canadians Admit to Checking Messages While Driving 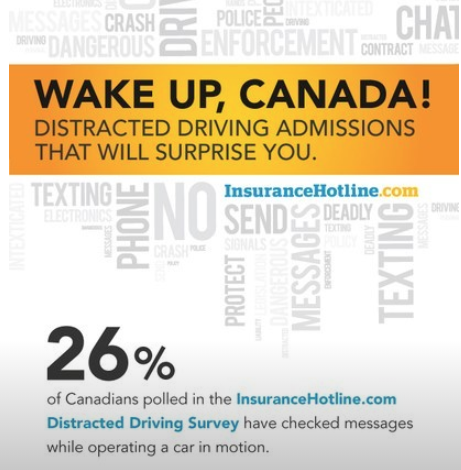 A new survey says one-quarter of Canadians have checked their messages while driving a vehicle, with even more doing so when stopped at a traffic light.

According to Toronto-based InsuranceHotline.com, their first annual distracted driving survey saw 26% of Canadian respondents admit to checking messages while driving, with 41% saying they were likely or somewhat likely to look at their phone and check messages at a stop light.

The survey also says 75% of respondents “feel unsafe as a passenger when a driver is talking on the phone or texting.”

These are very alarming numbers,” said Jacob Black from InsuranceHotline.com, in a statement. “What people fail to realize is the number of accidents and fatalities that are caused by not having your complete attention on the road.”

National Collision Database data reveals in 2016, distracted drivers involved in accidents caused 32,213 injuries and 310 deaths, which is higher than other infractions such as impaired driving.

Other data revealed from the survey:

Forum Research conducted the survey on behalf of Insurance Hotline, with telephone polling taking place from March 25-26, 2019, from a pool of 1,095 respondents across Canada aged 18 or older with a driver’s license.

The display technology experts over at DisplayMate have crowned the iPhone 14 Pro Max's screen the best to ever grace a smartphone, giving it their highest-ever A+ rating and "Best Smartphone Display Award." DisplayMate is one of the world's leading authorities on display technology. The corporation's reviews and reports are based on comprehensive, objective laboratory tests...
Nehal Malik
19 mins ago