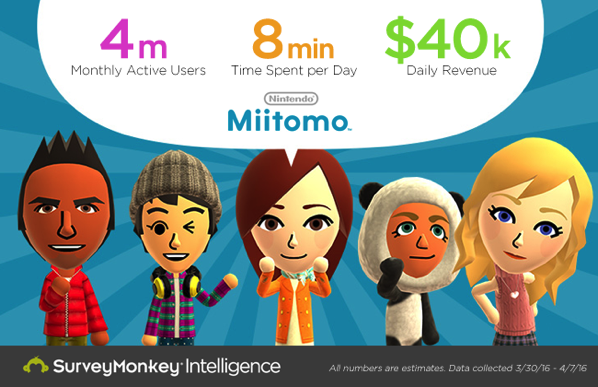 According to SurveyMonkey’s latest intelligence report, Nintendo’s first iOS app Miitomo was downloaded over 2.6 million times during the last week across iOS and Android, and is currently making $40,000 combined per day across the two mobile platforms. Every day last week, the game was downloaded an average of 370,000 times, and currently has 4 million monthly active users (MAU) with over 1 million daily active users (DAU).

On a per-user basis, we estimate the app has an ARPDAU (Average Revenue Per Daily Active User) of 3-4 cents. While low compared to mid-core games like Supercell’s Clash Royale, this is actually a healthy number for a more casual game like Miitomo, especially early on.

The big missing piece is retention which we will have a good read on by next week. Without good retention numbers, Miitomo will be just another 15-minute wonder. But if it can convince players to stick around, Nintendo could have an instant classic on its hands.

The report says that two-thirds of the app’s downloads are on iOS, with the remainder on Android. Roughly 80% of the revenue is from iOS with Android only contributing 20%.

It has also revealed by the survey’s data that an average user on a typical day has 2 to 3 sessions with a total of 7-8 minutes spent in the Miitomo app.

If you haven’t already, you can click here to download Miitomo for iOS in the App Store.