Tesla Motors CEO Elon Musk has said in an interview at Vox Media’s Code Conference that he doesn’t view Google as a potential competitor, while explaining that he is watching the competition closely including electric cars from existing manufacturers, TechCrunch reports. “Google’s done a great job of showing the potential of autonomous transport, but they’re not a car company”, he said. “Apple, yeah, that’ll be more direct”. 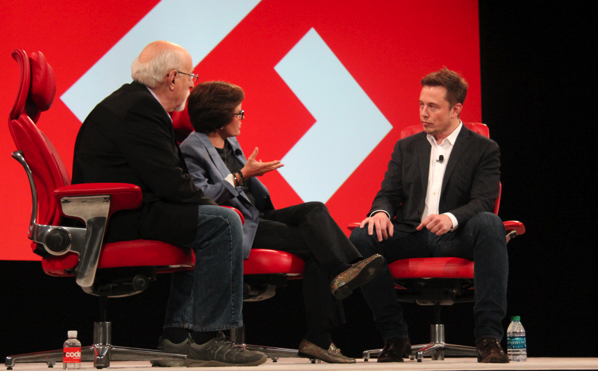 Musk said that Apple is certainly a potential competitor, since there has been a lot of speculation lately as to whether the Cupertino tech giant will produce its own car. While he was reluctant to reveal much on the stage, he did seem to have more information regarding the matter. So if he’s taking Apple seriously as a competitor, there’s a good chance the idea is at least being tossed around. He did however say that Apple may have missed an opportunity to get a car out the door that could be aggressively competitive with Tesla Motors.

“I think they should have embarked on this project sooner,” Musk said. “I don’t know… They don’t share with me the details. I don’t think they’ll be volume production sooner than 2020. It’s a missed opportunity. There’s a dozen car companies of significance in the world, the most any company has is approximately 10% market share.”

Apple is notoriously secretive about its special projects, but at the very least, it doesn’t seem apparent that the company is at all close to even getting close to the process of scaling up production for a car.

On asking whether he believes if Apple will succeed in building a car, Musk said, “I hope it works out”.