As reported by the folks over at Tesla North, new Tesla Model 3 and Model Y vehicles that are delivering without the Autopilot radar, are using the cabin camera for the Autopilot feature in addition to Tesla Vision. 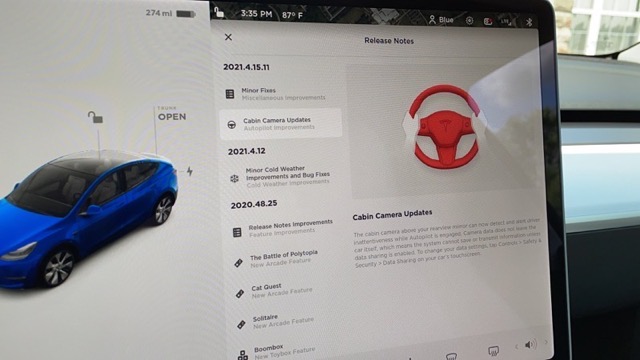 Kevin Smith from Tennessee recently received his Dual Motor Model Y, and his vehicle came with software update 2021.4.15.11, which now has the cabin camera activated.

Here’s what Tesla notes in the latest software update:

“The cabin camera above your rearview mirror can detect and alert driver inattentiveness while Autopilot is engaged. Camera data does not leave the car itself which means the system cannot save or transmit information unless data sharing is enabled.”

The Emergency Lane Departure Avoidance is, however, greyed out and cannot be used. Tesla says it will “be enabled in a future software release”, due to the transition to Tesla Vision.