Texture Has Shut Down, Directs Users to Apple News+ for $12.99/month 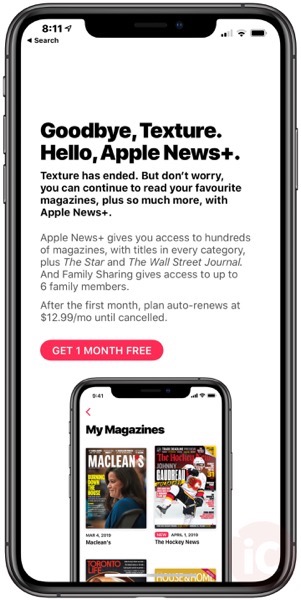 Digital magazine service Texture, which was once partly-owned by Rogers Media, until Apple acquired it for a reported $485 million USD, has officially shut down.

After Apple launched its subscription news service Apple News+, which integrates digital magazines from Texture, the latter announced it would be sunset on May 28, 2019.

“Texture has ended. But don’t worry, you can continue to read your favourite magazines, plus so much more, with Apple News+.”

Apple’s landing page highlights “hundreds of magazines”, plus access to The Star and The Wall Street Journal and Family Sharing for up to 6 family members. Apple News+ offers the first month free and afterwards, it’s $12.99 per month.

Are you switching from Texture to Apple News+?