The iPhone is the Most Popular Phone on Rogers, Bell and Telus [comScore]

The iPhone continues to dominate in Canada, although it’s still a tight race when it comes to iOS vs Android. According to June 2012 comScore stats revealed at Canadian Wireless Trade Show (via MobileSyrup), the iPhone 4 and iPhone 4S take the top two spots as the top devices from Rogers, Bell and Telus–look at these specific device numbers (iPhone takes 8 of the 15 top spots): 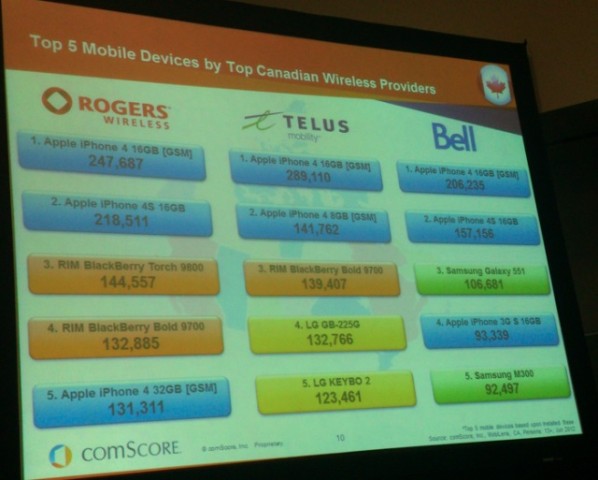 Notice the iPhone 4 remains the top phone, most likely based on carrier upgrades. I can imagine next time around the iPhone 5 will make a huge dent into these numbers.

When it comes to smartphone platform marketshare, Android and iOS are neck and neck, with the former at 34% and the latter at 32%: 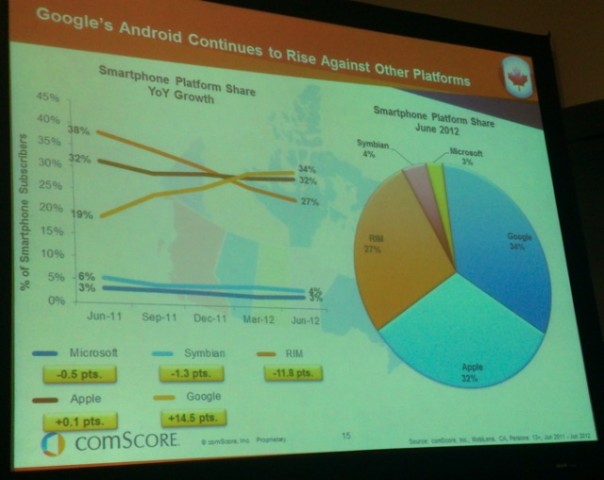 When it comes to top smartphones by satisfaction, the iPhone takes six out of the top ten spots.

As for trends, the report notes Android is quickly rising, growing at 14.5% since June 2011 to 34% of subscribers, the iPhone has stayed the same at 32%, and RIM’s crash continues to 27% (a drop of 11%). Why the sudden rise with Android? Numerous models from manufacturers every month are being released each month ranging from cheap to high end, versus one iPhone model release annually. 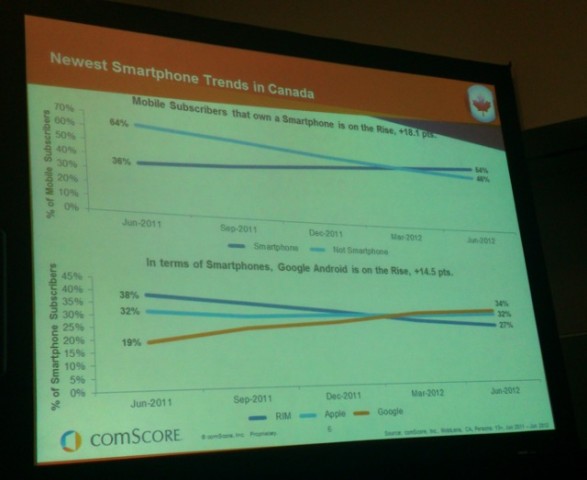 Last July, comScore noted there were 1.6 million iPhones being used in Canada, with the iPhone 4 being the most popular cellphone at the time. Fast forward to present day and that number has appeared to have more than doubled, according to the tracking firm Solutions Research Group, reports the CBC.

Toronto’s Solutions Research Group reports there are approximately 3.6 million iPhones in circulation in Canada, accounting for about a third of all smartphones (which agrees with the comScore data from above). Over the next 12 months, the company expects about 1.5 million new iPhone users to come into the fold, the vast majority of whom will be buying the latest device.

If current buzz around iPhone 5 pre-orders from Apple or the ‘Big 3’ are any indication, it appears iPhone numbers in Canada will continue to keep skyrocketing.

Black Friday is upon us and that signals December is just around the corner. Bell Media today released its list of new shows and movies coming to its streaming service Crave for December 2022. Coming highlights include the second season of Gossip Girl on HBO Max and the docuseries premiere of Branson on HBO. Letterkenny […]
Gary Ng
59 mins ago