Samsung, Amazon to Offer ‘The Lord of the Rings: The Rings of Power’ Series in 8K

Samsung and Amazon Prime Video have today announced a new collaboration that offers fans the opportunity to experience exclusive 8K content from the much anticipated ‘The Lord of the Rings: The Rings of Power’ series. 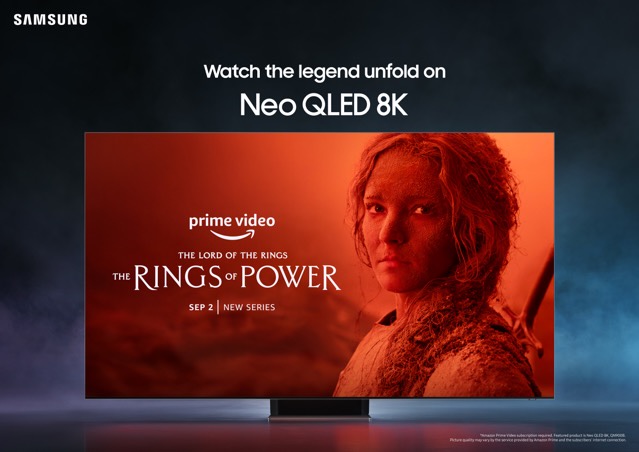 Samsung will be the first to offer series content in 8K resolution through a custom sneak peek with exclusive scenes. Opportunities for fans to access the exclusive 8K trailer will be announced soon.

Viewers will have the opportunity to experience the epic journey in superb depth and detail on Samsung Neo QLED 8K TVs and ‘The Wall’ 8K Micro LED displays.

The moment is almost upon us. #TheRingsOfPower arrives on @PrimeVideo September 2. pic.twitter.com/8G0WjmC8fR

“Collaborations such as this mark a major milestone in bringing 8K – the most premium display technology – to the forefront for viewers,” said Samsung VP Simon Sung.

“When considering how to immerse our global fans in the world of The Lord of the Rings: The Rings of Power, Samsung’s exceptional technology and screens felt like a natural fit,” said Andrew Bennett, Vice President of Global Device Partnerships at Prime Video.

“Samsung’s depth, detail, and incredible passion for the series has started us on an amazing journey together – one we can’t wait for audiences to experience.”

Additionally, viewers will be enveloped in the action thanks to Dolby Atmos and Object Tracking Sound – a Samsung technology that follows the action on the screen.

‘The Lord of the Rings: The Rings of Power’ brings to screens for the very first time the heroic legends of the fabled Second Age of Middle-earth’s history. This epic drama set thousands of years before the events of J.R.R. Tolkien’s The Hobbit and The Lord of the Rings, is set to premiere exclusively on Prime Video on Sep 2.