Almost 10 years ago, Times reporter Laura Locke scored an interview with then-Apple CEO Steve Jobs. The interview was recorded on April 28th, 2003, the launch day of the iTunes Music Store. Locke kicked off the interview, asking Jobs ”’Rip. Mix. Burn.’ [a tagline from Apple advertising of the time] has been Apple’s mantra as of late. Why go legit now?” Jobs quickly answered back explaining to the journalist that the “‘Rip. Mix. Burn.’ [slogan] was never not legit.”

During the interview, Jobs explained that the online venue would provide “a far better experience” for the end user and said that the ability to preview a song was “giant, just giant.” When asked about subscription services, Jobs said “Well, they’ve failed. They’ve completely failed. Nobody wants to rent their music. They have hardly any subscribers.” 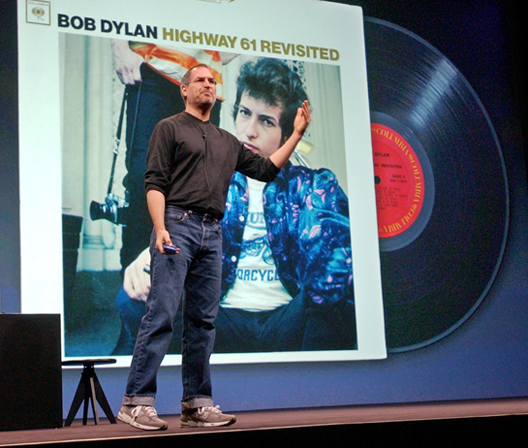 On launch day, the iTunes Music Store had only 200,000 tracks, and the store–and the iPod–only worked with Macs. Today, Apple is the number one music retailer in the United States, and its storefronts for movies, TV shows, and apps–all descendants of the music store–are hugely successful.

Looking back, it’s almost silly to recall the intensity of skeptics back in 2003 questioning whether legal music could catch up to the pace of free and illicit Internet files. When I spoke with Jobs, even he expressed uncertainty whether consumers would convert en masse to paying via the iTunes Music Store. Sixteen billion downloaded songs later, we know the answer.

You can read the full interview here.