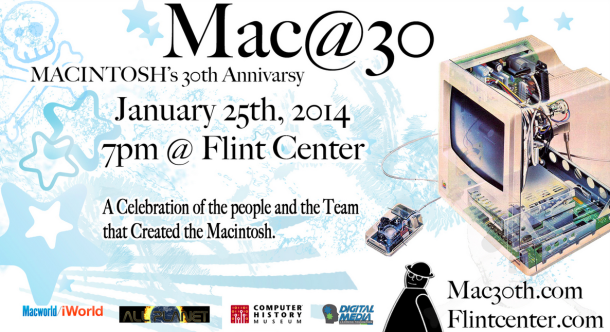 Steve Jobs introduced the Macintosh on January 24, 1984. Jobs explained the situation, Apple had to save the world from IBM. The Macintosh was a new kind of computer that was meant to show why 1984 was not like the 1984 of George Orwell’s novel, as shown in a Macintosh ad that aired day before its launch during the Super Bowl.

Before the introduction of the Macintosh Jobs said:

“It is now 1984. It appears that IBM wants it all. Apple is perceived to be the only hope to offer IBM a run for its money. Dealers, after initially welcoming IBM with open arms, now fear an IBM dominated and controlled future and are turning back to Apple as the only force who can ensure their future freedom.”

Jobs did not save the world from IBM and Microsoft but they managed to change how we think of personal computers by introducing a graphical user interface and mouse.

The 30th anniversary of the Mac and the team that created it will be celebrated at the Flint Center in Cupertino, near Apple’s main campus. The Flint Center was the same venue that Steve Jobs first introduced the Mac to the world. All Planet Studios, the Computer History Museum, and Macworld/iWorld are hosting the event which will take place on January 25 at 7pm.

The event will feature many members of the original Macintosh development team, previously unreleased video from the early days of the Mac and “surprise” guests, said said Gabreal Franklin of All Planet Studios. In addition, Ridley Scott, director of the “1984” commercial, as well as “Blade Runner” and other films, will talk about his experience creating the famous ad.

Tickets for the event range from $109.75 to $140.80 via Ticketmaster. Profits from the event will be donated to charities dedicated to promoting computer and Internet literacy.

Microsoft has revealed the first wave of Xbox Game Pass titles arriving on the service throughout October 2022. Kicking off the month, many of the games capture the spirit of the spooky season, leading into Halloween. This month, Xbox Game Pass subscribers can gain access to brand new titles available day and date such as...
Steve Vegvari
55 mins ago