The major smartphone platforms that dominate the scene currently are Apple’s iOS and Google’s Android OS. The ‘hardware spec’ wars can only go so far, as mobile processors have allowed us to churn out some incredibly powerful smartphones.

Hardware manufacturers are installing Android’s OS into their ‘innovative’ designs. One new phone that’s coming is the PlayStation Phone, as pictures were first revealed late yesterday by Engadget. What made me interested in this device was the reminiscent sight of a slider console controller (omg–buttons!). Real gaming with physical buttons still cannot be beat. Could the PlayStation phone be a true competitor to the iPhone?

It’s hard to believe that what we’re looking at is real — but we assure you, the picture above is in fact the PlayStation Phone you’ve long been waiting for. As we reported back in August, the device you see is headed into the market soon, likely boasting Android 3.0 (aka Gingerbread), along with a custom Sony Marketplace which will allow you to purchase and download games designed for the new platform. The device snapped up top (and in our gallery below) is sporting a 1GHz Qualcomm MSM8655 (a chip similar to the one found in the G2, but 200MHz faster), 512MB of RAM, 1GB of ROM, and the screen is in the range of 3.7 to 4.1 inches. Looking almost identical to the mockup we hit you with this summer, the handset does indeed have a long touchpad in the center which is apparently multitouch, and you can see in the photos that it’s still bearing those familiar PlayStation shoulder buttons. For Sony buffs, you’ll be interested to know that there’s no Memory Stick slot here, but there is support for microSD cards. 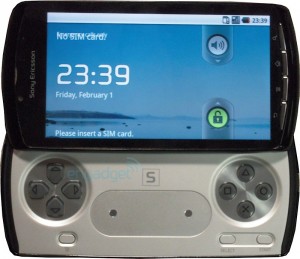 Portable game companies such as Sony and Nintendo have lost marketshare to new smaller apps available from mobile stores such as Apple’s App Store and the Android Market. If traditional gaming companies want to compete in this field, the creation of a smartphone could help them get consumers back into portable gaming.

The president of Nintendo America admitted that Apple poses more a threat to them than Microsoft when it comes to the gaming war. Casual gaming on smartphones appear to be big money makers. Gone are the days of paying $40-50 for one game. A $0.99 purchase of Angry Birds will bring you satisfaction and some more.

Would you buy the PlayStation Phone? Do people even play with their PSP and DS Lites anymore?