The Smartphone Revolution in Canada [Infographic]

The fine folks over at TechVibes have put together an interesting infographic documenting smarphone usage in Canada: 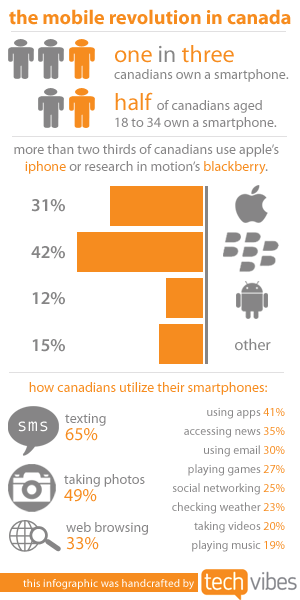 It’s interesting to note the Blackberry is most widely-used at 41%, and the iPhone 31%, and Android at 12%. It’s easy to see RIM in the lead when they have a tonne of various models, and a lower price compared to the iPhone. I’m pretty sure the percentage of Android users will soon catch up to RIM, given the vast choice of Android hardware available.

What do you think the future of smartphone usage will be in Canada?

The infographic was based on their analysis of sources from:Â comScore, StatsCan, Quorus Consulting, the Canadian Wireless Telecommunications Association, Cisco, May 2011.