Popular Canadian sports app theScore is getting ready to offer its fans a shot at a massive grand prize of $100,000 with a unique bracket-picking contest, exclusively via its iOS app during the next month’s NCAA March Madness. Dubbed theScore $100K Team Tourney Challenge, the contest delivers the same bracket-picking fun as regular contests, but with a unique social twist. 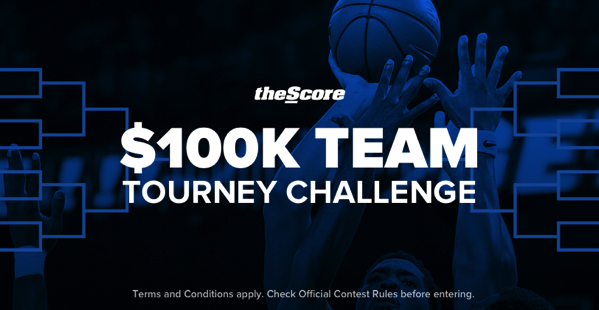 In addition to being able to create or join groups and compete against friends during the 63-game college basketball championship tournament, the challenge will also allow each group of friends to compete as a team to play for the grand prize. At the end of the tournament, the team of friends with the highest average score will walk away with $100,000. Furthermore, there’s also a prize of $25,000 for the best overall individual bracket, so all fans have something to play for.

“theScore $100K Team Tourney Challenge is a first of its kind, combining the great bracket-picking fun that sports fans love at this time of year plus an exciting new social dimension. All this, plus a significant prize to be won,” said John Levy, CEO and Founder of theScore. “Together with the excitement of competing with and against your friends, theScore app is the best place to make your picks this March.”

Entrants will accumulate points for every successful prediction they make throughout the tournament, with the final score going towards their average group total and their own individual bracket.

theScore $100K Team Tourney Challenge will be launched soon. For more information and to register your email, click here.