This past weekend, many third-party Twitter apps faced issues and frustrations, leading to outages across the board. Twitter clients including Tweetbot, Twitterrific, Fenix, Echofon, and Talon all began going down Thursday evening for unknown reasons. Four days later, these apps continue to face issues and Twitter hasn’t said a word.

It’s largely believed that the issues stem from third-party clients tapping into Twitter’s current API. Affected developers continue to face challenges applying for a different API key. However, due to an unknown reason, Twitter continues to give back errors blocking apps like Tweetbot access to host its services. Throughout the entire ordeal, more and more developers and reports have claimed that the outage may be deliberate.

Over the course of the weekend, Tweetbot was able to gain access to Twitter’s new API via a new API key. However, due to Twitter’s rules that “new apps” can only have access to post at low limits, Tweetbot operated with one arm tied behind its back. For a moment in time, users were able to log in and browse through their Twitter feeds. However, they couldn’t post anything as they would get an error message saying that they’d reached a “data limit.” It wasn’t long before Tweetbot went down once more.

Mysk, two developers for iOS software published a Twitter thread outlining their analysis of the situation. It appears as though the “data limit” may have been referring to Twitter’s limit of allowing 300 posts per three hours across all Tweetbot users. The thread continues to state that Tweetbot’s API calls show that the app resorted to API v1.1. Though, it used to support API v2 according to its app description.

Looks like @tweetbot applied for a different API key. The app is working now but Twitter API restricts new apps to low limits. The limit to post tweets has quickly been reached. All Tweetbot users now share a limit of 300 posts per 15 minutes.
Twitterrific is still suspended. pic.twitter.com/DrDMsB2uz3

Tweetbot co-creator Paul Haddad took to Mastodon to air his frustrations throughout the weekend. Following Tweetbot’s second outage, Haddad said, “And now dead again, along with some old unused API keys, which proves that this was intentional and we and others were specifically targeted.” According to a report from The Verge, Haddad has not heard from Twitter at all throughout the weekend on the matter. 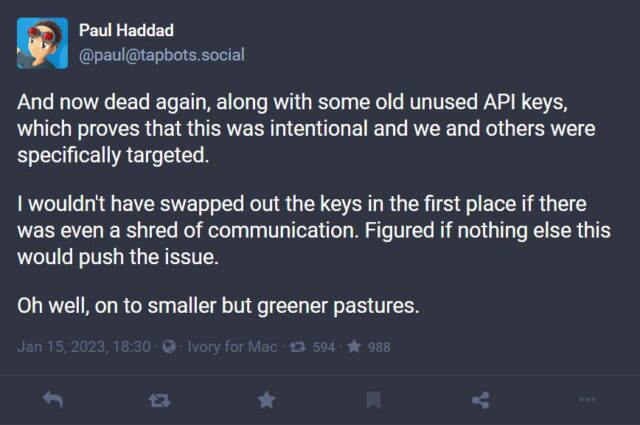 Across the official Twitter account and the Twitter Support account, the company has refrained from commenting on the many outages. Twitter CEO Elon Musk has also been quiet on the matter. According to The Information, the reason behind Twitter’s silence may be that the outages are intentional. As clients like Tweetbot, Twitterrific, Fenix, Echofon, and Talon continue to face hurdles, Twitter may have taken deliberate steps to close them out. The report goes on to state that an internal message from a senior engineer of the company claims the outage is “intentional.” However, another message states that Twitter is preparing a statement for affected developers. As of the time of writing, it’s not known if this has been sent.