TikTok, ZOOM Top the List of World’s Most Downloaded Apps in March 2020

Popular video-sharing app TikTok was the world’s most downloaded non-game app during March 2020 with over 115.2 million installs to mark a 98.4% increase from last year. According to Sensor Tower, the countries with the most installs of the app during this period were India at 29.5 % of its total downloads and Brazil at 9.4% 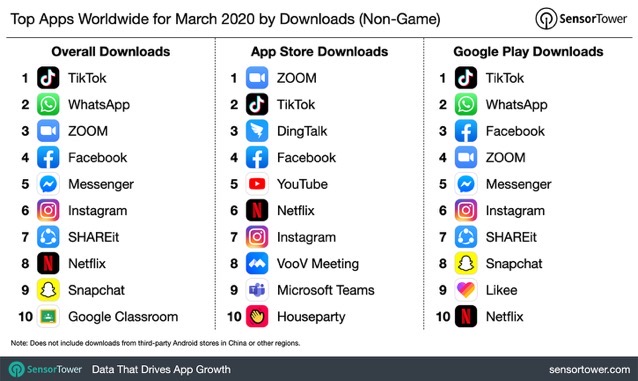 WhatsApp was the second most installed non-game app worldwide last month with close to 76.3 million downloads, which represented a 7.7% increase from March 2019. The countries with the largest number of WhatsApp downloads were India at 33.4%, followed by Brazil at 8.5%.

In terms of App Store, ZOOM was the most downloaded app worldwide with TikTok coming in at second spot, followed by DingTalk, Facebook, and YouTube to complete the top 5 downloads for the month.

WhatsApp is finally rolling out the ability for users to leave group chats silently without notifying all members of the group that they are no longer part of the conversation. When you leave a WhatsApp group silently, only the group admin will be notified that you have left the chat. Meet leave groups silently 👋...
Usman Qureshi
10 hours ago