Apple CEO Tim Cook visited the New York Stock Exchange as part of his vacation on Wednesday with his nephew. While on the floor of the NYSE, reporters quickly surrounded the Apple executive, asking him about business and AirPods. 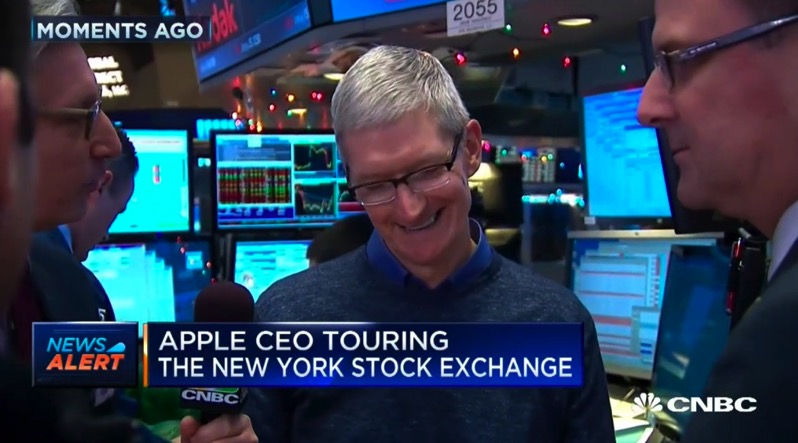 Cook declined to talk about Apple’s business, but did say it has been a “great holiday”, speaking to CNBC. He said AirPods, the company’s latest wireless headphones, are “a runaway success” and that Apple is “making them as fast as we can.”

AirPods are pretty much sold out and are expected to ship in six weeks time for online sales. When a reporter asked Cook if he could speed up production, the CEO replied “I’m trying the best I can.”

The CEO said “I’m just here with my nephew, enjoying a couple of days in New York,” adding “I love it. I love it. I wanted him to see what you guys do for a living,” when asked about the NYSE. Apple is listed on the Nasdaq.

Check out the short clip from CNBC below:

What’s the best way to track stock for AirPods? Originally we suggested iStockNow, but a better alert system has been developed by AirPods Stock Alerts, which can send you real-time email updates.

Earlier today, we told you AirPods were in stock a the Apple Store Eaton Centre in Toronto, and as of writing, that still appears to be the case for the $219 CAD wireless headphones. The Eaton Centre store is just one of three locations right now in Canada and the USA that has AirPods in stock, according to AirPods Stock Alerts.