Chinese vice premier Ma Kai, a member of the CPC Central Committee Political Bureau, met with the CEO of the world’s most valuable company on Wednesday morning. They had discussed a series of topics including privacy and security. Cook described it as “very open”, “fascinating” and “impressive”, but he declined specifics. 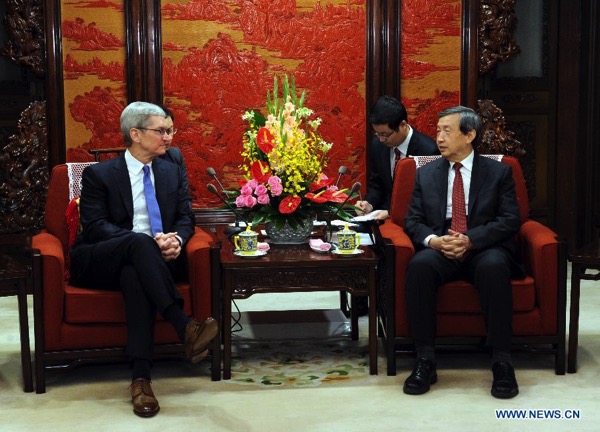 Cook’s visit coincided with the fourth plenary session of the Central Committee of the Communist Party of China (CPC). After meeting with Chinese vice premier Ma Kai, Cook visited a Foxconn factory in Zhengzhou City, where the iPhones are made.

In an exclusive interview with Xinhua, he confirmed that Apple plans to bring Apple Pay to China, as well as other technologies, since it is a “key market” for the company.

“We want to bring Apple Pay to China,” he said, “I’m convinced there will be enough people that want to use it. It’s going to be successful.” […] “China is a really key market for us,” said the CEO, “Everything we do, we are going to work it here. Apple Pay is on the top of the list.”

Another important step for Apple is the forthcoming wearable, the Apple Watch, which will ship in early 2015 for an introductory price of $349. Other plans are to increase the company’s footprint in the Chinese market by increasing the number of Apple Stores from the current 15 to 40 within two years.