Tim Cook has been featured on the cover of Outside Magazine, talking Apple Park, wellness and the Apple Watch, and device addiction. 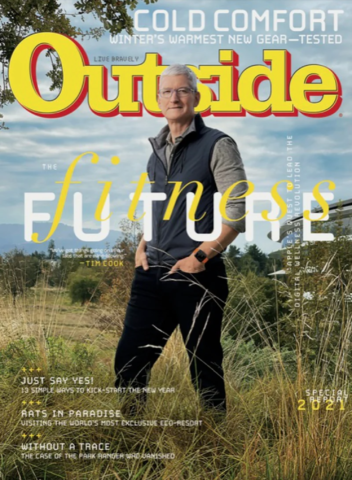 Touching on a number of subjects — all surrounding health and well-being — the Apple CEO began by talking about the company’s headquarters, Apple Park, and how it improves working conditions for all employees.

“It’s like working in a national park,” Cook explains, noting that more than 80 percent of the 175-acre campus is green space; there are more than 7,000 trees. The design “brings the outside in and the inside out,” he explains.

The Apple CEO also talks about how his health and staying healthy are one of the most important aspects of his life, a passion he’s brought to his company over the years.

“We all know intuitively, and now with research, that physical activity is a key part of longevity and quality of life,” Cook says. “I’m off-grid for that period. And I am religious about doing that regardless of what’s going on at the time.”

Cook also touches on the Apple Watch and its far-reaching health goals, including the A-Fib and ECG features that released on recent models.

“When we first came out with the Watch, I started getting notes from people saying, ‘I found out I have a major problem with my heart. And I wouldn’t have known to go to the doctor had it not been for the Watch,'” Cook says. “At first these were trickling in. And then it was like a faucet. You realize that there’s something here. That led to A-fib. It led to ECG. It led to notifications if your heart rate gets too low or too high.”

Apple is also getting into the fitness coaching market with its Fitness+ subscription service, something Cook explains was a natural step for the Cupertino company’s growing services.

“In a way, we’ve been in this business of coaching. It’s just that we’ve been coaching about something else,” he says. “If you go into a retail store, the thing you’re most likely to be looking for is help—to create something, to learn something. Fitness+ is taking that personal touch into the wellness space.”

Finally, Cook touched upon the increasing problem of device addiction and the steps Apple is taking to help users manage their time, like the recently-released iOS feature Screen Time.

“We take the challenge to continue innovating in that space just as seriously as we take the challenge to keep innovating in each of the product categories we’re in,” he responded. “My simple rule is, if you’re looking at your device more than you’re looking in somebody’s eyes, you’re doing the wrong thing. I recognize that there are many people who are doing that. And some number of those are unhappy that they’re doing it, and some number are not. And where we’ve placed our energy thus far is on making people aware, not playing the heavy hand to tell them what’s good for them.”

Read the entire article over at Outside.