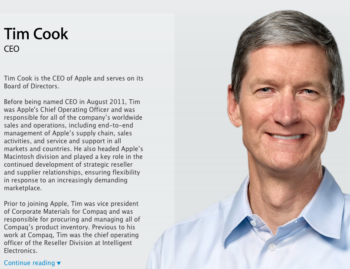 Apple today announced some historic numbers as it generated a $46 billion dollar quarter and sold 37 million iPhones. The total cash on hand sits at $97.6 billion, with no specific direction in what to do with it all.

Can we expect to hear more good things from Apple? Well, according to a purported email sent out by Tim Cook, it could happen at tomorrow morning’s Apple Town Hall meeting, notes 9to5Mac:

Thanks to everyone’s hard work, we’re off to a great start in 2012. Last week in New York we launched a groundbreaking initiative for education with iBooks textbooks, and today we reported the strongest quarter in Apple’s history.Please join me tomorrow morning at 10 a.m. in Town Hall. We’ll review our record-setting results and discuss some exciting new things going on at Apple.The meeting will be broadcast live to many sites in Cupertino and other Apple locations. Please check AppleWeb for details.

There’s no word on what could possibly be announced tomorrow. Surely, it can’t be something ‘big’, but if it is I’m pretty sure you’ll hear about it soon enough. Maybe I’ll email Tim myself and find out.