Apple CEO Tim Cook has climbed up to the third spot on Vanity Fair’s 2017 New Establishment List from number 11 in the previous year’s list. The annual list is described by the publication as the list of top 100 “Silicon Valley hotshots, Hollywood moguls, Wall Street titans, and cultural icons”, which also includes Apple’s services chief Eddy Cue at number 73. 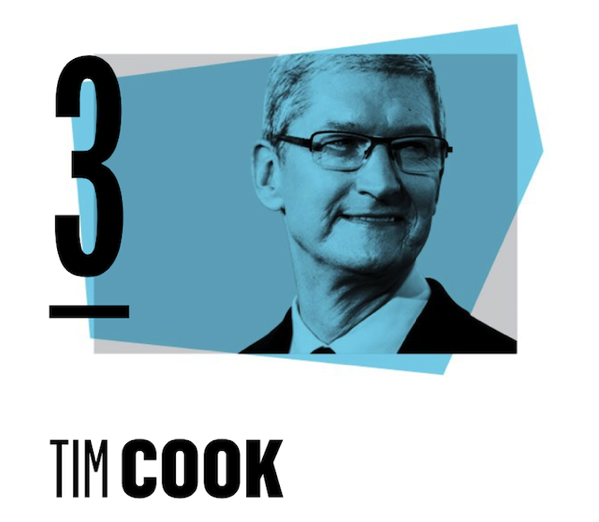 The list is topped this year by Amazon CEO Jeff Bezos, who also overtook Bill Gates as the world’s richest person for a brief span earlier this year. He also bought Whole Foods for $13.7 billion, which sent Amazon’s stock soaring beyond the value of the acquisition itself. Bezos is followed by Facebook CEO Mark Zuckerberg at the number two spot on the list.

With a market cap north of $800 billion, Apple is on track to be a trillion-dollar company.

As consumers reject the new MacBook Pro and Apple arrives late to the game with HomePod, an Echo wannabe, the company is clinging to the iPhone for more than half of its revenue—an inauspicious strategy, since phone sales are predicted to decline.

Cook showed up at Trump Tower in December to kiss the ring, then went to the White House in June to try to convince Trump of the importance of coding in schools.

Launching HomePod, Apple’s voice-activated virtual assistant. The product, a competitor to Amazon’s Echo, may be the new hit Apple so desperately needs as interest in the iPhone wanes.

Planet of the Apps, Apple’s foray into original programming under Cue, “feels like something that was developed at a cocktail party,” according to one review.

One notable new entry is wrestler turned actor Dwayne “The Rock” Johnson, who broke in at 37th on the list.

Last month, Amazon Canada and Affirm announced monthly payments would be launching and this week they went live. On eligible items, you can now see mention of how much you can pay for the item over a period of months with Affirm, noted underneath pricing. You can see the Affirm line on the Apple Watch […]
Gary Ng
13 mins ago