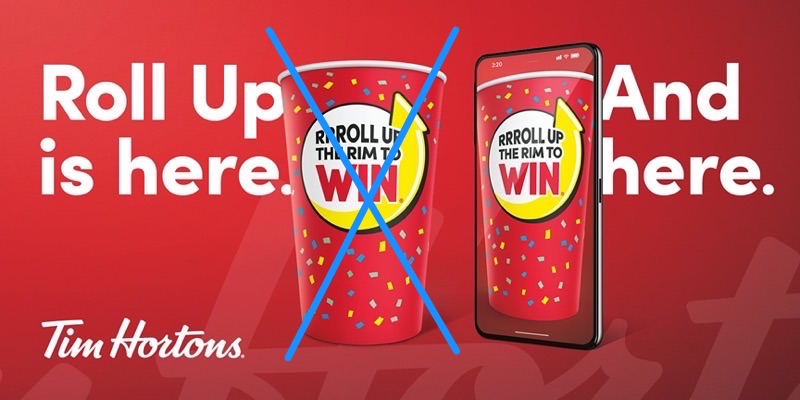 Ahead of Tim Hortons kicking off its annual Roll Up the Rim to Win contest on March 11, the company has announced it will be ditching the contest’s paper cups, “in light of current public health environment,” or due to the current outbreak of coronavirus.

The Roll Up the Rim to Win contest for 2020 was already set to debut new changes, such as digital entries for the first time via the company’s iOS and Android apps and on the web.

With the contest paper cups now no longer being used, Tim Hortons says it will be “redistributing all $30 million of prizes to restaurant giveaways and the digital Roll Up The Rim contest.”

The issue at stake its the fact most people roll up the rim on paper cups with their mouths, so this decision “in the best interests of guests, restaurant owners and over 100,000 team members.”

“Tim Hortons does not believe it’s the right time for team members in our restaurants to collect rolled up tabs that have been in people’s mouths during this current public health environment,” explained the chain in a press release.

Other prizes from paper cups such as cars, TVs, rewards miles and more will be moved to the digital portion of the contest for the entire four week period, valued at $16 million.

Tim Hortons says cash registers will be programmed to award prizes to random winners, which will be automatically be credited at the time of purchase.

“We will always do the right thing for guests, restaurant owners and 100,000 team members. Given the current public health environment, we decided to make a change to our contest. We have redistributed all $30 million of prizes to restaurant giveaways and our digital Roll Up The Rim contest,” said Hope Bagozzi, Chief Marketing Officer, Tim Hortons.