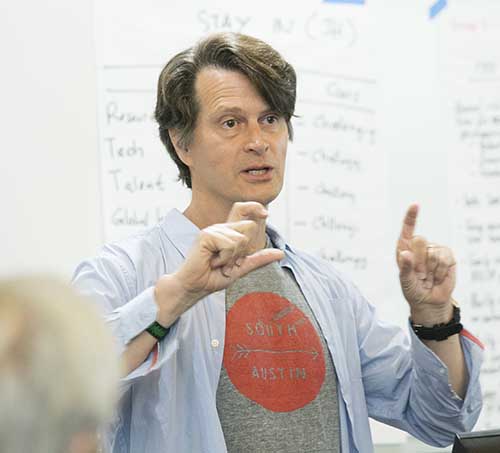 John Hanke, MBA ’96 and CEO of Niantic Labs, is the driving force behind Pokémon Go, the hottest craze to hit smartphones.

Since the game was released just a week ago, the augmented reality (AR) game has sent millions of players to the streets hunting for Pokemon that pop up with the help of location services. The amount of users that downloaded the game nearly crashed Niantic’s servers, and the number of active users is nearly on par with Twitter.

In an interview, Hanke spoke with TIME about the game’s huge success, the impact of AR at a large scale, and what he finds interesting about AR going forward. Here are some snippets from the interview showing what Hanke had to say with respect to each of the aforementioned topics:

“We planned for success, and we provisioned our infrastructure for it. But to be honest, we’ve been overwhelmed by the level of interest, by the sheer number of people who want to play and the amount of time they want to play. It definitely surprised us. We thought it would be popular. I mean we didn’t go into it thinking people wouldn’t be excited by it.

We all have apps that we use to track our runs, to count our steps, to time our bike rides. I think that’s gone hand-in-glove with people going out and doing more of those activities. Adding a gamified element to it and a social element, I would agree with you it’s new territory, and people are figuring it out. In terms of our responsibility there, we have guidelines for our players about how to play, about being respectful of the law and of people’s private property and being nice to other users.

The unique thing about AR versus [virtual reality, or VR] is that AR enhances the things that we do as human beings out in the real physical world. It’s not something that completely replaces them with a fantasy experience. You see that with Pokemon Go. There’s of course this fantastical Pokémon element, but really it’s enhancing your experience of going out for walk or doing something with friends.”

You can read the full transcript of the interview from this link.