With the introduction of iOS 16, Apple has debuted another handy little feature that allows users to transfer an eSIM from one iPhone to another via Bluetooth while setting up cellular service, MacRumors is reporting. 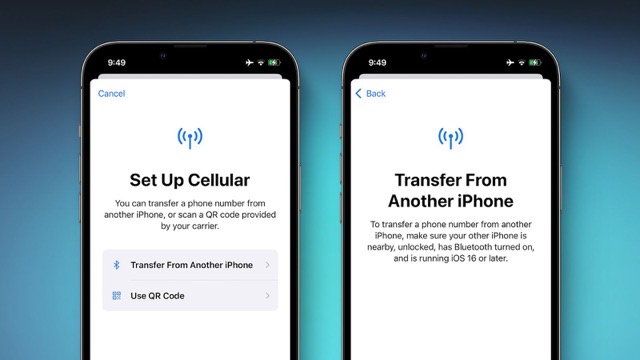 As shown in the image above, when you tap the ‘Set up eSIM’ option in the iOS 16 Settings app, a new option pops us that lets you transfer an eSIM and its associated phone number from another iPhone via Bluetooth.

Apple notes that to transfer an eSIM from another iPhone, you need to make sure the other iPhone is nearby, unlocked, has Bluetooth turned on and is running iOS 16 or later.

The feature appears to be available in multiple countries, including the United States and the United Kingdom, but it is only possible to complete Bluetooth transfers of eSIMs issued by carriers that support the feature. Given that iOS 16 was only announced a few days ago and is currently in beta, carrier support may be limited right now.

It is not yet known whether it is possible to transfer an eSIM from one iPhone to another in Canada yet but we’ll be sure to update you once we know more.