Twitter Blue has once again been working on bringing its edit button to the fold. In a new tweet, the premium subscription of the social media platform shows off how the edit function will work both in terms of the user tweeting as well as the general audience seeing the changes.

this is a test to make sure the edit button works, we’ll let you know how it goes

“Hello, this is a test to make sure the edit button works, we’ll let you know how it goes,” the tweet now reads. The Twitter Blue account clearly tacked on a bit at the end during the window of edit eligibility. Previously, Twitter confirmed that once a tweet is published, subscribers to Twitter Blue will have 30 minutes to make any edits.

To identify if a tweet has undergone any edits, there is a clear stamp at the bottom. Next to a pencil icon, a disclaimer stating “Last edited 4:57 PM – September 29, 2022” is found. This clearly outlines the time and date a tweet was edited in order to keep things a bit more transparent on the platform. 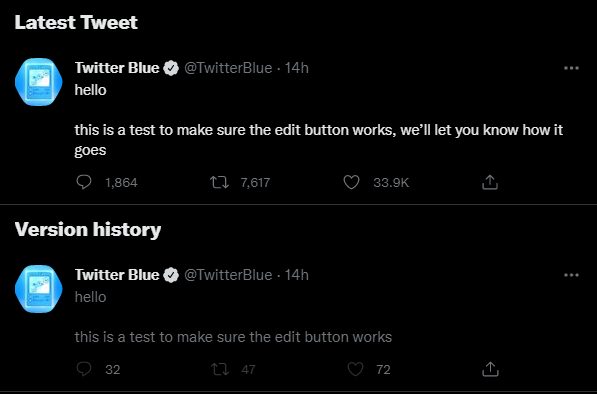 Additionally, users can click the “Last edited..” line of text in order to pull up the original tweet. Once clicked, you’ll find a breakdown of the Latest Tweet (the edited version) and the Version history (the original tweet).

As of now, Twitter Blue’s edit button tests are being conducted in Canada, Australia, New Zealand and the U.S. Originally, it was claimed that the edit button functionality could come to all subscribers of the $4.99/month service by end of September. As of writing, it does not appear to be the case. However, this latest test does signal that a wider launch is imminent.