By analyzing billions of Tweets over a two-year period, Twitter has released a new report on the top 3 Canadian conversation trends of 2022. “We’re diving deep into what’s now, what’s next, and what we’ve got our eyes on in the future,” notes Twitter. 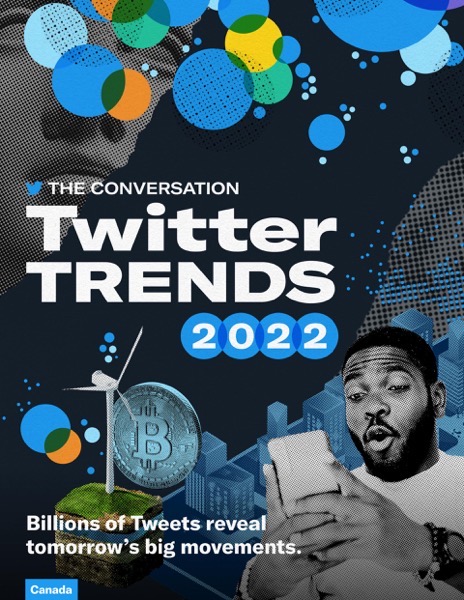 Twitter Canada’s top 3 conversation trends for this year provide a snapshot of three massive cultural conversations that are helping to redefine the Twitter experience for millions of Canadians every day.

Twitter’s analysis found the following three must-know trends which are about to go big.

The pandemic has fundamentally shifted the conversation around sustainability and the future of our planet. It’s not that people don’t care, but the way they think about it has shifted.

Conversation on Twitter indicates that people have become a little desensitized to impending doom. While mentions of “doomscrolling” are up, “eco anxiety” and “apocalypse” have declined.

The tables have turned. Fans no longer just follow, they’re calling the shots, making the rules, and creating worlds
they want to be part of.

Canadians have been going crazy for virtual and audio spaces where they get to mingle with the teams, artists, and brands they love. This intimacy drives true collaboration and engagement with new fan marketplaces.

The Montreal Canadiens were one of the first major players to launch their own series of collectibles, paving the way for “tokenization.”

While older generations built wealth by buying property, that’s off the table for many younger Canadians, who are instead investing in virtual sneakers. People are looking for new places to spend and grow their earnings. And have fun while doing so.

Currencies, exchanges, and meme stocks dominate. But this is just the start.