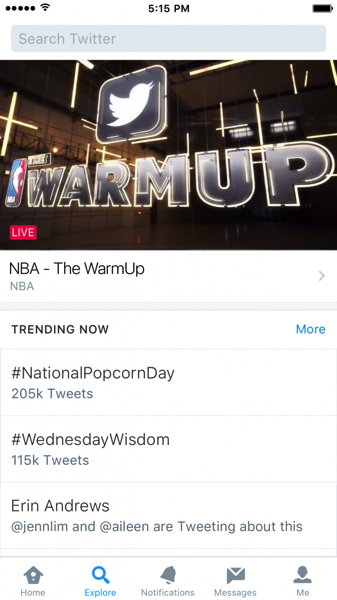 Twitter has today announced on its official blog that it is debuting a new tab on Twitter for iOS called ‘Explore’, that essentially replaces the Moments tab and highlights collections of notable tweets curated by Twitter editors. Twitter Moments will continue to be featured in the new Explore tab, but they’ll be de-emphasized in favor of trends, popular topics and latest news.

Over the past year, we’ve been exploring different ways to make it simpler for people to find and use trends, Moments, and search. During our research process, people told us that the new Explore tab helped them easily find news, what’s trending, and what’s popular right now.

Nothing is going away – we’re just making it easier to find what you want. Explore will begin rolling out today on Twitter for iOS, and in the coming weeks on Twitter for Android.

The new tab basically brings together trends, Moments, and search in a manner that closely resembles Instagram’s Explore tab. It can also display live videos at the top of the feed.

If you want to check out the new Explore tab–it’s slowly rolling out for iOS. Just make sure you have the latest version of Twitter for on your device.