Twitter has today introduced a new “Happening Now” feature, which automatically groups tweets by event. According to BuzzFeed, the feature will start by highlighting tweets from sports games, before moving on to TV, breaking news and more. Happening Now will appear in your home timeline, and if you click on an event, it will take you into a dedicated timeline for that event. 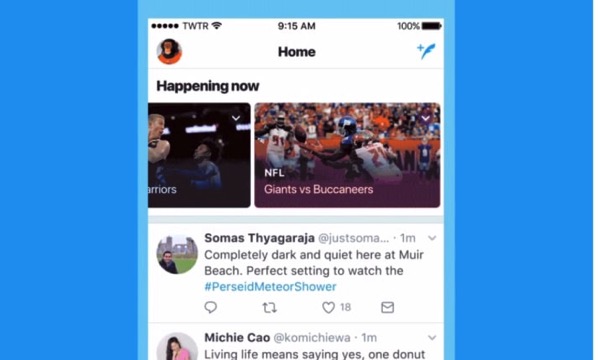 What this means for a casual Twitter user who say is a Giants fan, is that he can use the app to follow the latest Tweets about the Giants game, without having to find the dozens of sportswriters and accounts of Giants fans who may be tweeting about the game.

A Twitter spokesperson also told the source that the tweets are sorted algorithmically, and that the company’s prior work has helped it build the capabilities to sort tweets for live events.

“There’s so much happening on Twitter all the time, but it could be easier to find events you are interested in, and the conversation around those events, in the moment,” the spokesperson told BuzzFeed News. “If we know you are a Giants fan, we can guess you’d love to see the conversation specifically around a game. All this content already exists on Twitter – with Happening Now, we’re collecting it and making it simpler for you to find it in one place.”